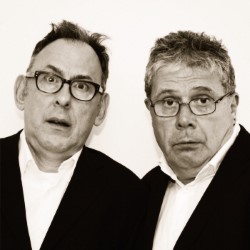 Stand-up poetry for the beat generation. Thirty years after they first appeared together with the legendary Circus of Poets, David Harmer and Ray Globe are back as The Glummer Twins to put the 21st century to rights. Two old blokes. One guitar. Rock and rhyme and poetry. 'Genuinely funny' (Saga Magazine). #meninlycra #trainspotter #themodgrandfather #elvisquiff #astreetcarnamedretired

The oldest stand up poetry double act in town .. probably.

With a combined age of 124, The Glummer Twins - David Harmer and Ray Globe must be the oldest stand up poetry double act in town. And it's turning out to be quite a year for the duo...

Since their first gig at Sheffield's legendary Shipping Forecast in October 2014 they've been busy writing, arranging, previewing and open mic'ing around South Yorkshire. And the fruits of their labours? A new hour long show they are taking for a week's run at the Edinburgh Festival Fringe in August.

The Glummer Twins - David Harmer and Ray Globe - last performed in Edinburgh in 1985 [yes 1985!] when David appeared as one of the legendary Circus of Poets and Ray did his one man singer/songwriter show at the then newly opened Pleasance Courtyard. So is this nostalgia? An attempt to recapture their lost youth? "Well to be honest .. yes. That's certainly part of it" according to Ray. "But we also think we have something special to offer Edinburgh audiences. Being the wrong side of 60 has certainly given us a different perspective on life. So we're trying to put a positive spin on getting older. Yes their are the moans, the groans, the shakes, indigestion, the bit that aches. But there are plenty of reasons to be cheerful. Why worry about old age; after all it doesn't last that long."

So what can we expect from The Glummer Twins new show? Billed as "stand-up poetry for the beat generation" previews have gone down well with both young and older audiences. So what's it all about? Well, two old blokes doing rhythmic twohanded stand-up poetry with occasional support from a battered old epiphone guitar and a multi channel looper. And the topics? Middle aged men in lycra, trainspotters, funerals, ageing mods, unhealthy eating, turning 60, middle class elderly rappers, foreign holidays and buying a used car from a dodgy bloke in Doncaster - and that's just the first half of the show.