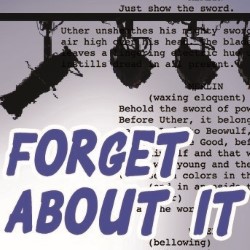 After rehearsing for months, one actor still has a bit of trouble remembering the production, let alone the lines... Going off-script and off-story, how will the cast keep up with a show that just keeps getting weirder?

A play about actors, acting and a koala.

Forget About It is an original comedy about a dysfunctional group who are rehearsing for a production of Romeo and Juliet. But arrogant actors, a kinky koala and a deluded director are pointing towards a tragedy far beyond fair Verona. Will they be able to hold it together come opening night?

This is Imperial College Drama Society's second year at the Fringe, and the first year bringing original material. The society is best known (when it is known at all) for convincing an audience that a group of science and engineering students can, in fact, act.