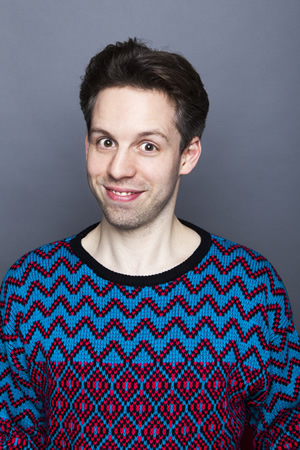 Nick Hall has a genius if dangerous and un-workable idea for how he is going to get everyone to come to see his show.

I started in 2010 with The Three Englishmen sketch group, before trying my hand at some stand-up. It went so well I'm now doing a one-man character comedy show. I'm bloody delighted with it.

A fast-paced, energetic and hilarious hour of character-comedy performed in a Portakabin for your enjoyment next to a giant Purple Cow. 23 words.

I have a pathological fear of the month of August. This is the only way to take my mind off it.

Setting the rest of Edinburgh on fire and then putting a sign fire-exit by my venue. I can't see how that would go wrong.

I'll probably return to London covered in gold. In a Game of Thrones-way.

Dressing up inside a giant Pavarotti suit with three other people to sign Nessun Dorma.

Hitler. I guess I'd have to tell him what happened at the Nuremberg Trials. He doesn't come out well.

Because I'm right behind you as you read this!