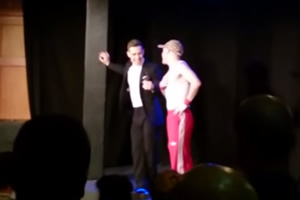 Lee Nelson (aka Simon Brodkin) has made a name for himself recently with some high profile stage invasion stunts. Remember when he threw money over FIFA boss Sepp Blatter, or when he caused Kanye West to stop his Glastonbury set?

The cheeky chap recently got a taste of his own medicine when Scottish character comedian The Wee Man - played by Neil Bratchpiece - walked on to his stage at a gig during the Edinburgh Fringe.

During Nelson's set, The Wee Man got out of his seat and loudly jokingly said "I'm a big fan of yours as you know, but I do not approve of promoting negative stereotypes of Scottish people." Nelson then hands him the mic, commenting "I can't talk about stage invasion can I..."

You can see the action unfold in the video below: