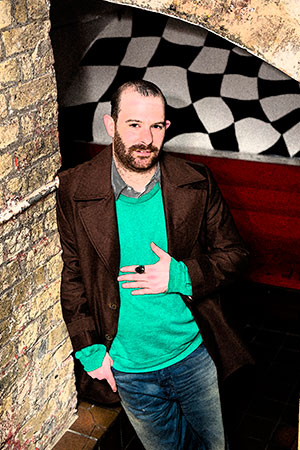 Career is definitely too strong a word here, but I am very flattered that you used it as it's the most positive thing anyone has said about my live act in print.

With the greatest respect to you and your publication this is the only press request I've had and I use the term "press request" very lightly as I emailed you asking to fill this in. I'll let you draw your own conclusions on how happy I am with my "career".

Gigantic, colossus, misjudgement. A mistake, why haven't I learnt anything from previous Edinburghs. There is actually something wrong with me laugh-fest.

Oh because I did a really good show in January. Sold out the Pleasance Theatre in London, they were turning people away. Every joke landed, people bought me drinks after the show, patting me on the back. It felt like I'd finally arrived as a stand up. Booked Edinburgh in the next day. Fast forward six months and I haven't previewed to an audience of bigger than six people and I've sold two tickets for the whole Edinburgh run and it's too late to back out.

I can do a really great show but when it comes to selling it I am the worst. Like all great artists I am filled with self loathing and low self esteem.

Flyering for me is an opportunity to vomit emotions over tourists until they walk into a Free Fringe show they don't want to see to get away from me. Last year people would enthusiastically take a flyer, I'd start talking and they'd give it back.

I've done some financial projections and if I get 15 people in a day I'll break even, I'm 35 years old I've been in the industry for 13 years and I'm hoping to get 15 people in a day. There are people half my age in 100 capacity rooms who've already sold out their runs. There are comedians who've been going a couple of years and they are on panel shows, national tours and have an autobiography out. I've got a colour coded spreadsheet with 15 people a day in green as my break even. When I started out I wanted my own TV show I just said out loud "I hope I do get 15 people in a day". I'm sat alone in an Internet cafe.

I'd interviewed Michael Barrymore for my now defunct comedy magazine The Fix. He was in a play playing Spike Milligan. After the show, he was in the bar with a crowd of people. He called me over and announced to the group "This is Harry, he runs a magazine out of his mum and dad's house, he reminds me of Richard Branson." I was £20,000 in debt from said magazine at the time. George Wendt who plays Norm in Cheers was sat at the bar at the time. 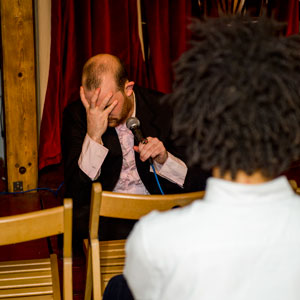 Andrew Lawrence. I just want to be 100% sure that I definitely agree with everything he's said on social networks the last few months.

My day job is programming great acts into venues , the last thing I'd want to do is programme a venue for a night in Edinburgh. I'd book no one and just sit in a big empty theatre on my own for two hours. It wouldn't be the first time, see end of my show for details.

Read this interview back, how well do you think I'll deal with not getting 15 people in a day?