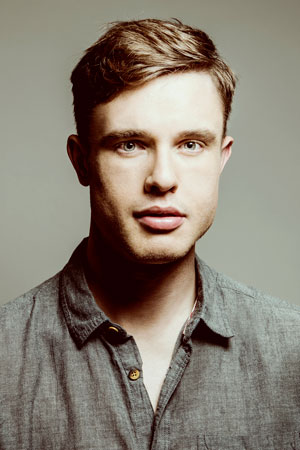 I started doing sketch comedy at university in 2005 and got into doing stand up in 2007. I've done multiple shows and podcasts in an idiot double act (Peacock & Gamble) and only did my debut solo hour last year. The pace of my career can best be described as glacial, but nice things have always happened along the way so I would say that I'm very happy with where I'm at. I'm still enjoying myself and that's the major thing that counts. The only ambition I have left to fulfil is to have my own line of kitchen gadgets and I can't imagine that's far off now.

A nice young man tells you why it's hip to be square. Rappers and Batman better steer clear because you're in for it.

I have no idea. If I think about it for too long I'd imagine I'll have to confront some dark issues about why I deserve to be punished in such a way. I have been trying to not think of it as a stressful experience but now you have reminded me it is and I'm spiralling so thanks for that.

A trail of muffins that lead into my show.

Hopefully I won't lose what I normally do as I'm doing the PBH Free Fringe but I somehow will still find a way to lose money. If I came out of the Fringe with a profit I'd feel like a fraud.

When I was in a student sketch group, we flyered Sean Connery. He said "sorry, I've got to catch a plane" which sounded so badass and Bond coming out of his mouth - an effect that was doubled by Nish Kumar loudly singing the Bond music. (He waited for Sean Connery to get far enough away to not hear - we're not idiots. He's MASSIVE.)

Oh man, so many. I've already bought tickets for Katherine Ryan, Sam Simmons, Beasts, Alfie Brown and Adam Riches but that is really only a small percentage of the list. There's the guys that everyone always talks about so I'll give their plugs a breather. I'm looking forward to (amongst others) Michael J Dolan, Holly Burn, Stuart Goldsmith and Sean McLoughlin. And I've already seen brilliant previews from Fin Taylor, Phil Wang, Rhys James, Nish Kumar, James Acaster, Tom Parry and oh God there's so many good people I'm having a panic attack.

Ray Peacock MCing. He's my favourite MC - something unique always happens, he's got magical powers over an audience. And then in any order: Jeff Innocent, Morgan Murphy, Patton Oswalt and a sketch group consisting of Jesus, Mohammed and Buddha.

Mussolini. I shared a flat with that guy at the 2005 Fringe and he used to leave oats everywhere.

They can if they want. I've written loads of jokes and I'm proud of it. I'm not going to beg. I realise I'm down on my knees crying but I'm not begging.