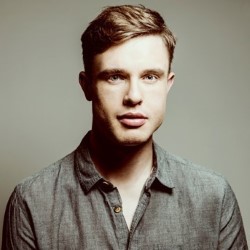 Star of Almost Royal (E4) and the not beard one from the Peacock and Gamble Podcast, Chortle Award-winning Ed Gamble moseys back into town with a brand new stand-up show about why it's hip to be square. He's a prophet, a shaman and a wildly inaccurate blurb writer. As seen on Russell Howard's Good News (BBC Three) and Edinburgh Comedy Fest Live (BBC Three). 'Attention grabbing liveliness and considerable flair' (Telegraph). 'An ability to open his mouth and spontaneously say something hysterically funny' (Guardian). 'Tremendously funny and well-constructed' (BroadwayBaby.com). 'Plain funny in the best possible way' (BeyondTheJoke.co.uk).

Star of Almost Royal (BBC America/E4) and the chart topping Peacock & Gamble Podcast, Ed Gamble moseys back to the Edinburgh Fringe with Lawman - a brand new stand-up show about why it's hip to be square.

Ed Gamble doesn't just love rules. He wants more. Past attempts at transgressions have left him in no doubt that straight down the line is the only way forward. So join the Chortle Award winning comedian as he introduces legislation to keep everyone, from the rich and the beautiful to the superhuman, in check. Proving just how much fun we can have if we all play by the rules, Ed will undoubtedly keep audiences laughing with his distinctive worldview and charmingly excitable delivery.

In 2014, Ed Gamble was awarded Best Compere at the Chortle Awards and his solo debut (Gambletron 5000) led to an appearance on BBC Three's Edinburgh Comedy Fest Live, a run at the Soho Theatre, and an invitation to perform at the Montreal Just for Laughs Festival this July. Since last summer, Ed has also been filming the second series of BBC America's Almost Royal, which will be broadcast on E4 in the UK later this year. Other TV credits include appearances on Russell Howard's Good News (BBC Three), Man Down (Channel 4), Dave's One Night Stand (Dave), Virtually Famous (E4) and Sweat the Small Stuff (BBC Three). Ed has also written for Never Mind The Buzzcocks (BBC Two), Mock The Week (BBC Two) and Ask Rhod Gilbert (BBC One) and supported Greg Davies, Russell Kane & Chris Addison on tour.

For five years Ed was co-writer and host (alongside Ray Peacock) of the iTunes topping Peacock and Gamble Podcast which earned them two Chortle Award nominations, a place in the Guardian's top-ten comedy podcasts, and has seen them featured as part of the in-flight entertainment on British Airways. Together, Peacock and Gamble starred in a short film, Warm Up (BBC Comedy Online), hosted The Comedy Club (BBC Radio 4 Extra), hosted and produced a Chortle sponsored daily podcast at the Edinburgh Festival Fringe, and presented the top rated show on Fubar radio.