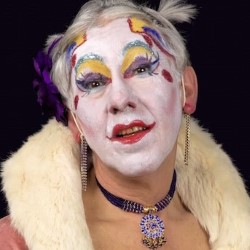 Ecce Homo. A hom-com in song. Naughty Nickers of the legendary gay theatre group Bloolips tells the story of their early 1980s debut in the USA, his big San Francisco romance with handsome Dr Jeff, and his subsequent life as one of the UK's longest surviving HIV+ diagnoses and living with AIDS. Using both well-known and original songs the preview audiences at Homotopia 2014 described it as '...an extraordinary life which is at once funny, deeply moving and full of joy ... as silly and entertaining as it is historically significant. An astonishing feat'.