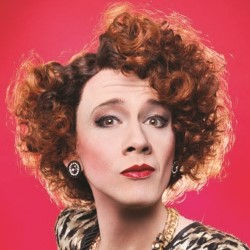 Join Diane, former owner of 80s Essex nightclub The Flick, and her band, The Buffet, for a showbiz, late-night musical spectacular, with comic tales of her troubled and infamous past. 'Diane Chorley, fronting a tight indie pop band whilst recounting her 80s fall from grace, was the most fun I had in a comedy show this Summer' (Stewart Lee). 'The darkest, driest, most hilarious ex-con I've ever met. I love Diane Chorley' (Eva Wiseman, Observer).

As part of Soho Theatre's 14 show Edinburgh Festival Fringe season of the most vibrant acts in new theatre, comedy and cabaret, join the incomparable and ever so lively Diane Chorley, former owner of Eighties' Essex nightclub The Flick, and her band The Buffet, for a glitzy, fun-filled musical spectacular, amongst comic tales of her troubled and infamous past in their first ever full Edinburgh show.

Hailed the Duchess of Canvey, Diane Chorley rose to fame and notoriety in the eighties as the owner of the most popular, most celeb-filled, Canvey Island nightclub The Flick. "I opened those doors as wide as I could. The gays, the straights, the Gary's, the Punks, the Goths, the Yuppies, everyone was welcome... before you know it you got the bleeding world on your doorstep... one week I've got Jason Donovan swinging off a light fitting, the next week Roy Walker's got barred for getting John Virgo in a headlock," said The Duchess.

But things turned awry and life at the top came crashing down when the truth behind the garish curtains was uncovered, the club was shut down and Diane was incarcerated. Since her release, she's relocated to Hackney, tracked down her adoring partner Ron, found new members for her backing band, The Buffet, and has been performing to packed crowds across East London's working men's clubs and hipster hangouts for the past two years, including one week in the dead of night in a damp cave in Edinburgh (where she was seen by Stewart Lee) during last year's Fringe.

It is therefore with much anticipation and excitement that the Duchess of Canvey, Essex, Dagenham, your hearts, and Ron's, returns to Edinburgh for her first full Fringe season. So raise your glasses and join in as Diane, backed by The Buffet, sings all her greatest hits - including The Duchess, Sex Lives of the Rich and Famous and Dagenham Eyes alongside scintillating covers Freedom and Time Of My Life - and shares her memoirs of how she flew too close to the mirror ball.