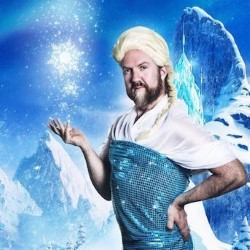 Dave Callan, Irish born Australian based comedian brings the sequel to last years must see comedy dance spectacular to Edinburgh. 'Uproarious, Jaw Dropping' (Rip it Up). 'Honestly, I haven't laughed so much at such sustained silliness since the curtain went up on this year's comedy festival' (Herald Sun). 'Flashdance looks like it could do him a serious mischief' (Chortle.co.uk).