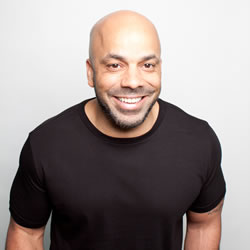 Clayton's comedy is about being mixed race and from living in London to living in the northwest. A comedy adventure about things in life we do and don't realise we are doing them!!!

My 60 min show includes a special guest followed by my own comedy outlook from growing up in London being mixed race to moving to the North West of England, from being married and having children.

My comedy focuses on every day subjects including holidays, text messages and growing old. My comedy has been a success so far due to me covering a vast array of subjects and my ability to engage the crowd.

I am an up-and-coming comedian and would like you to join me. There's Black Comedy and White Comedy now there's MIXED RACE COMEDY!