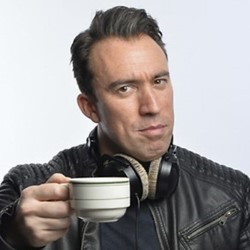 Christian O'Connell has collected multiple radio awards as a national breakfast show DJ for 16 years. He's also collected multiple death threats and abusive complaints, all for you to hear in this show. You'll be stunned at what people actually complain about. Follow his journey from teenage mix tape maker to award-winning DJ. Fresh from his sold out national tour, in this third stand-up show enter Christian's world of A-list weirdos, offended clowns and angry cat lovers. 'Furiously funny' (Guardian). 'As engaging live as he is on air' (Scotsman).

In his new show, You've Ruined My Morning...And Other Fan Mail, Christian recalls the ups and downs of being a breakfast DJ. From winning multiple awards for his show (good), to receiving death threats and abusive letters from offended clowns and angry cat lovers (not so good).

Christian O'Connell is one of the country's most well-loved broadcasters with his radio shows on XFM, Radio 5Live and his current daily breakfast show on Absolute Radio earning him a record 12 Radio Academy Awards and three Arqiva Commercial Radio Awards, including this year's Broadcaster of the Year. However it is not just the British public who have supported Christian's turn to comedy, with a legion of celebrity fans the likes of Ricky Gervais and Stephen Merchant describing him as 'always funny and charming'. His debut national tour, Breaking Dad, sold out across the country.