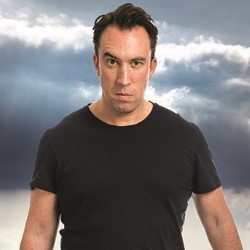 10-times Sony Award winning DJ Christian O'Connell (Absolute Radio) returns after his 2013 sold out acclaimed debut. O'Connell is a dad on the edge and if you've ever been a dad/had a dad/known a dad, this is the show for you. A show featuring beloved pet death, pensioner sex advice and the inherent evil of Peppa Pig. **** (Big Issue). **** (Herald). **** (BroadwayBaby.com). 'Smart and funny' (Ricky Gervais). 'Furiously funny' (Guardian). 'A natural, warm and charismatic comedian' (Big Issue). 'O'Connell is as engaging live as he is on air' (Scotsman).

10-times Sony Award Winning DJ Christian O'Connell returns to the festival for his second year after his 2013 acclaimed debut This Is 13. He will be performing at the Underbelly Dairy Room once more for 18 nights with his brand new show Breaking Dad.

O'Connell is a dad on the edge and if you've ever been a Dad/had a Dad/known a Dad, this is the show for you, even if they were shit. It's a show with hilarious stories and observations from the battleground that is fatherhood. The show includes his endeavours to bring up two daughters, barring them from seeing Miley Cyrus, accidentally killing a beloved family pet, his relationship with his own dad, pensioner sex advice and the inherent evil of Peppa Pig!

His debut Edinburgh show This Is 13, saw him leave behind the cosy comfort of his radio studio and taking the biggest risk in his career so far. The risk paid off! The show was a success and received much critical acclaim. Frank Skinner had this to say; "It's a brilliant show, I was surprised just how good it was!"

Christian currently hosts the National breakfast show on Absolute Radio, where he was poached from XFM. Every weekday morning 1.5million people wake up to his show. He has celebrity fans from Ricky Gervais to Jeremy Clarkson and he's won awards for hosting BBC Radio 5 Live's bi-weekly show Fighting Talk. He has presented TV shows for ITV, Sky 1, Channel 5 & BT Sport. His guilty pleasure is that he's a huge fan of martial arts.