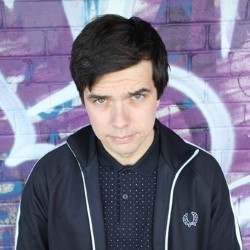 Back for his fourth year, Chris questions whether he's still chasing his dream, or just too lazy to get a proper job. Recently married, Chris resents adulthood, and fears if there is an afterlife, he might not fit in... Voted within the Top Five Irish Comedians (Hot Press, 2013), along with storming the Irish and UK festival scenes; Kent is effortlessly original - a truly natural born comedian. Soon to be seen on Russell Howard's Stand Up Central. 'Breathes new life into anecdotal comedy' (List). 'Carefree, comedic bulls-eye' (Dubliner Magazine).

Hailing from Cork in Ireland, Chris made his comedy debut in 2009 having given up his day job as an electrician, and very quickly scooped a string of accolades. He secured the Bulmers Nutting' But Funny title and the Comedy Smackdown Award at the Galway Comedy Festival, and appeared alongside Dylan Moran, Bill Burr and David O'Doherty.

He has enjoyed widespread critical acclaim, with Hot Press Magazine voting him one of the 'top five Irish comedians' to see, The List saying that he 'breathes new life into anecdotal comedy' and The Scotsman adding that he is a 'compelling storyteller, truly surprising, beautifully delivered.'

Chris has appeared on RTE's Next Week's News and The Craig Doyle Show, and is a regular on RTE Radio 1's The Second Republic. He will soon be seen on Russell Howard's Stand Up Central.