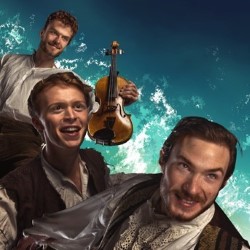 Captain Morgan's second voyage sees the grizzled pirate facing giants, sirens and gunslingers in a brand new comedy adventure. The follow-up to smash hit Captain Morgan 1: The Sands of Time, expect action, adventure and intrigue as the captain and crew journey to the Sea of Souls. 'One of this year's hottest tickets' ***** (TheNewCurrent.com). 'Watching this show is like experiencing fallout from an imagination bomb' (BroadwayBaby.com, ***** on Sands of Time). Playing alternate days with Captain Morgan 1: The Sands of Time.