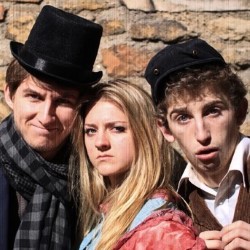 Improvised comedy with a twist. The Cambridge Impronauts - ***** (Tab.co.uk) - transport you back to the timeless era of Dickensian London. Your suggestions, including the title of the tale and a twist in its plot, inspire a unique comic creation. Whether it contains plucky orphans, ruthless businessmen or tyrannical step-parents, each story has never been seen before, and will never be seen again. 'Brilliant improvisers ... expect to laugh - a lot' (Varsity). 'Crazy, unexpected and hilarious' (Tab.co.uk). 'It was the best of times...' (Charles Dickens).

What the Dickens is a long-form improvised comedy in the style of a Charles Dickens novel. Audience members, as they enter, write down a suggestion for the title of a 'Dickens novel they wish they could see', and the name of a new Dickensian character; these are placed into a hat. As the show starts, one of the performers will pull a title out of the hat, and a show with title will be performed for the remainder of the hour. During the show, a new character is introduced, using the hat.

There are no set characters, set plots, or elements that remain the same during the run - everything is spontaneously created and each show has the potential to have any storyline or characters. Long-form improv consists of a single overarching plot or idea, and is different from short-form improv, which is the reverse of this, and has been popularised by shows like Whose Line Is It Anyway? and Fast and Loose. Long form improv is extremely popular in the live comedy circuits in American Cities, notably Chicago, New York, and L.A., though it is gaining in popularity in the UK in recent years.

The performing company, The Cambridge Impronauts, are a student run improvised comedy group based at Cambridge University. The Last 18 months has seen the Impronauts transform into a vibrant part of Cambridge's famous comedy scene. Most of the Cast of What the Dickens regularly appear in Footlights shows, as actors and stand-up comedians, and partake in their own written comic plays and sketch shows. The Impronauts termly long-form shows, each themed around a different genre, sell out very quickly, and have become one of the regular highlights of the Cambridge comedy scene.

They chose Dickens as a theme because, in March 2014, The Impronauts performed their sell out, critically acclaimed show The Importance of Being Improvised, in which they used the styles of a variety of famous authors. Dickens was by far the most fun. The outlandish characters and epic plotlines lend themselves perfectly to the fun, mischievous side of improv.