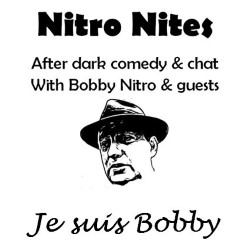 Bobby Nitro hosts After Dark, a comedy chat show and showcase. The alter-ego of consultant, writer, raconteur and mentor Andrew Hutchinson, Bobby puts aside his stand-up act and takes to the couch. His guests, spread over five performances, are an eclectic mix of politicians, musicians, actors, writers, comedians and bohemians at large. The audience interacts, their takes on random topics are forensically dissected and their talents showcased, as the banter and fun flow. Why would you attach a condom to your ballot paper? Will Werner sit down? Je suis Bobby. Follow @NitroNites for guest updates.