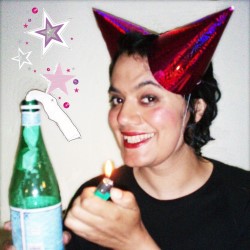 The end of the world is nigh... As is the end of your day at the festival. Come celebrate! At The Molotov Cocktail Party! Expect twisted tales and your expectations to be twisted. Join Becky and a riotous mob of party guests, including Medusa, proprietress of Peckham's favourite fictional lap dancing club, the Gaza Strip. Plus a selection of other upcycled/ripped off mythological characters as they attempt to right the world's wrongs, and wrong its rights. May also contain jokes, poems and maybe more, in a show with little or no connection to its title!