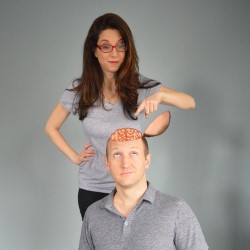 Fringe First winner and science rapper Baba Brinkman (Rap Guide to Evolution) teams up with neuroscientist Dr Heather Berlin to explore the brain basis of improvisation. What's going on under the hood when a musician or comic improvises, and why are the spontaneous moments of life the most memorable? A married couple in real life, Baba and Heather share their love of science and creativity, with featured guests and unscripted moments of hilarity. 'The best show of the Fringe in 2014' ***** (EdUncovered.com). 'Geek heaven! Who says science is boring?' ***** (TheEdinburghReporter.co.uk).

What's going on "under the hood" when a comedian or musician improvises?
Why are the spontaneous moments of life always the most memorable?
Does anything actually rhyme with Dorsolateral Prefrontal Cortex?

A married couple in real life, Baba and Heather premiered Off The Top at last year's Fringe, presenting the latest research on brain science and creativity, with featured guest performers mixing their scripted material with unscripted moments of hilarity. This year Baba and Heather have been in the lab at New York University, scanning Baba's brain whilst he raps, to verify the ideas explored in last year's show. In this year's edition of Off The Top, audiences will witness a live experiment with brain activation, pitting faddish consumer neuro-gizmos against hard-core neuroscience.

Heather (aka Dr. Heather Berlin, PhD, MPH) is a cognitive neuroscientist at Mt. Sinai Hospital in New York - she recently hosted Superhuman Showdown on the Discovery Channel, a show about people with extraordinary talents. Her new show Science Goes to the Movies is currently broadcasting on CUNY TV in New York.

Baba and Heather's research at NYU places rappers in an fMRI scanner while they freestyle and recite memorized lyrics, to see how brain activation changes with each task.

Discussing this study and other similar studies, Heather and Baba explain the results in practical terms in relation to other performing arts, i.e. comedy, music, improv and theatre, while demonstrating live with hilarious guest acts.

Debunking media simplification, myths surrounding the brain, and all manner of other neuro-bollocks, Off The Top is a bona fide scientific experiment and unrestricted freestyle extravaganza, a heady mix of comedy rap songs written by Baba, brain science explained by Heather, and a rotating roster of daily guests. Audience members are able to live tweet suggestions for the next freestyle, making for a genuinely interactive show.