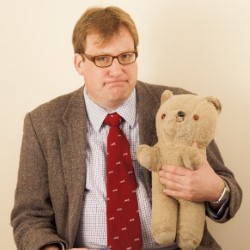 Following 2014's hugely popular five-star Feminism for Chaps. Andrew wants his son to be everything that he's not. But how do you ensure that your child doesn't grow up to be a comedian? As seen on ITV's Stand-Up Hero and Comedy Central's The World Stands Up. 'Absolutely superb, hilarious' ***** (Chortle.co.uk). 'Clever, personal and very funny' **** (Scotsman). 'Exquisitely funny' (Time Out). 'Gender politics just got fun' (BroadwayBaby.com).

Following the popular and critical success of his five-star show, Feminism for Chaps, at the Edinburgh Festival Fringe 2014, Comedian and Father, Andrew Watts, returns this year with a show that's tailor made for anyone who is desperate to ensure that those they love don't make the same mistakes they did.

Andrew wants his son to be everything that he's not. But how do you ensure that your child doesn't grow up to be a comedian?

Andrew Watts has a distinctive style and very original material. His posh boy humour is intelligent without distancing himself from the audience. Lawyer turned comedian, Andrew is extremely likeable and invariably wins a crowd over as he canters, like an apologetic tsunami, through challenging subjects.

Previously a solicitor in London, he is now a full-time comedian and has written and performed three full-length shows, I Wish I Could Be Like Andrew Watts, Born To Be Mild and Feminism for Chaps. All three received four and five-star reviews. His awards include Reading Comedy Festival New Act of The Year and he was a finalist in Amused Moose Laugh-Off, So You Think You're Funny and The English Comedian of the Year Competition.