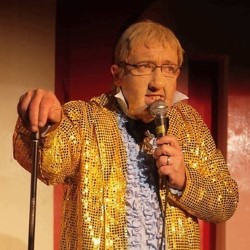 Continuing to defy the years, the nation's favourite octogenarian Barry from Watford returns to Edinburgh this year with his Bingo Bonanza show in tow. Following his monthly residency at The 100 Club in London, he brings his one-of-a-kind variety night full of bingo, stand-up, and some very special guests to the Fringe.

From calling radio stations to give his opinion on the burning issues of the day, 82 year-old Barry from Watford - created and performed by acclaimed actor and writer Alex Lowe - has since been forging a career in showbiz, making a name for himself through his radio chats on Iain Lee's Absolute Radio show, BBC Radio 2's Steve Wright in the Afternoon, and in his very own series shortly broadcast for BBC Radio 4. For TV he has appeared on Channel 4's Feeling Nuts with Angelos Epithemiou, who he now has a weekly podcast with.