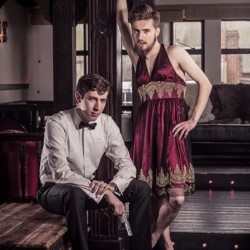 Alex Fox and Dom O'Keefe improvise high-octane, tongue-in-cheek, never before seen adventures in the style of a James Bond film from your suggestions. Praise for previous work: 'charismatic and charming' **** (BroadwayBaby.com). '...impressive and original' (DailyInfo.co.uk). '...immense fun' **** (EdFringeReview.com). 'Clever sketch comedy' (Independent). 'It is rare to see a debut as strong as this' ***** (TheNewCurrent.co.uk). '...a tightly paced, incredibly funny show' **** (ThreeWeeks). Dom directed The Oxford Imps' sell-out runs at the Fringe in 2013 and 2014. Alex was nominated for Best New Act at London SketchFest 2014 as part of The Awkward Silence.

With just months to go before the release of the new James Bond film, Daniel Craig has pulled out. With Idris Elba saying no, and even Roger Moore refusing to get involved, Alexander Fox and Dom O'Keefe bravely take up the baton. Armed only with live musical accompaniment, foley equipment and your suggestions, they improvise a completely new Bond film for your eyes only (and, more importantly, for Eon Productions).

Fox and O'Keefe aim to combine the runaway success of fellow Oxford Imps graduates Austentatious and Aaaand Now For Something Completely Improvised with the ubiquitous appeal of 007 to create a uniquely charming and engaging piece of family-friendly improvised theatre.

- One third of sketch trio The Awkward Silence: nominated for Best New Act at London Sketchfest 2014.

- Formerly Head Writer for The Oxford Revue, including their sell-out run at Edinburgh 2013.

- Directed two sell-out runs at Edinburgh (2013 and 2014) as the youngest ever director of The Oxford Imps.

- Also performing his own one-man show Stereotypist at Edinburgh 2015.