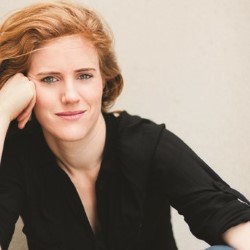 In 2012, Sarah Kendall's critically acclaimed show Get Up, Stand Up concluded with a story about dropping the c-bomb on a high school teacher, how much trouble she got into, and the comic way she got out of it.

In Touchdown she deconstructs this story and reflects on how, like with many stand up routines, the punchline was manufactured for the sake of the joke.

And so this year she is retelling the story as it truly happened - and in doing so has developed a captivating narrative of her life as a self-conscious teenage girl, of being unpopular, having her heart broken and of losing a friend. Touchdown is a coming-of-age story that explores the clumsiness of adolescents, their awkward relationships, and painful need for friendship and love.

At the 2014 Melbourne International Comedy Festival, Touchdown was the winner of the Piece of Wood Award. Chosen by a panel of award-winning comics, it is awarded to the peer with the most exciting and innovative show at the festival. Previous winners have included Stewart Lee, Tony Law and Sam Simmons.