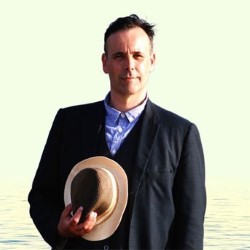 Rob Newman makes a hotly anticipated return to the Fringe. In his first new show for seven years, Rob tells a story of how personal disasters and jammy flukes led him to stumble upon a new theory of evolution, which he calls the Survival of the Misfits. A story which includes altruistic vampire bats, Prince Kropotkin's daring escape from a Tsarist dungeon and Richard Dawkins' postman wrestling naked. Time Out's #1 Most Popular Comedy Show, London (January 2014). 'Funniest comedian I have ever seen ... a passionate, chaotically brilliant comedian' (Sunday Times).

Robert Newman makes a hotly anticipated return to the Fringe with his first Edinburgh show for seven years.

Robert Newman's New Theory of Evolution tells how a series of personal calamities and jammy flukes leads Rob to hit upon a whole new theory of evolution, which he calls the Survival of the Misfits. Robert Newman's New Theory of Evolution explores the exciting new discoveries in the field of evolutionary biology, which, the show argues, have put paid to selfish gene theory to open up instead a much more intriguing world of wonder.

The paperback of Rob's fourth novel The Trade Secret is published October 9th by Glaswegian indie Cargo. Rob's previous novel The Fountain At The Centre of the World, was Dave Eggars' Book of the Year in Los Angeles Weekly.