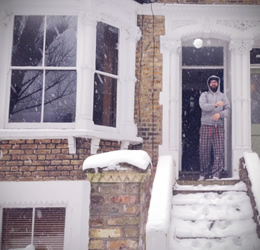 Kitson and Fathers. At Midnight, In a Basement (With Some Very Poor Sightlines) A Successful Man (Thirty Seven) Clings On to the Dwindling Remnants of a Once Mighty Friendship Group, Buying Their Company With The Attendant Credibility Of His Implicit Approval And The Crossed-Fingered Promise of a (Meagre) Fee (+VAT)

So - here is the news - I'm doing some shows in Edinburgh, during the fringe. Now, this is not being announced late in the day as some sort of crafty anti marketing gambit but rather as a result of my having been busy with other things / ongoing incompetence / staggering (heroic) lack of regard for programming convention.

Basically, I knew I wanted to do something low key, where I would get to hang out (spend time) with my friends (colleagues) and a reason (purpose) to be in Eddy B (Edinburgh) where I could go and see shows and maybe ride a bike and strut around like a forgotten hero waggling my dignified rejection of awards culture in the air whilst constantly mentioning my many many many awards (THEY DO NOT DEFINE ME) - but I didn't know what that thing would be.

Midnight: 3rd - 12th August (not Fridays and Saturdays)
A Variety of Things In A Room - Daniel Kitson and Gavin Osborn

The show with Gavin will ideally be a satisfying hodge podge of songs from Gav and short, hermetically sealed bits of writing from me, short stories, lists, a letter or two, maybe with a little bit of film and some of my insane electronica.

I dare say that sounds like a bit of self regarding palaver but we have put a fair bit of thought into trying to make it as reasonable and even handed as possible whilst keeping the naughty touts away and bearing in mind the operational implications of day tickets on The Stand box office whilst they have countless other shows to be dealing with. I dare say there will be some of you who are oddly livid about that system and believe it could have been better organised to suit your needs and to those people i can only apologise, by which i mean - you can stick it right up your jumper.

ADVANCE TICKETS WILL GO ON SALE AT NOON ON WEDNESDAY 9TH JULY AND ARE ONLY AVAILABLE ONLINE VIA www.thestand.co.uk