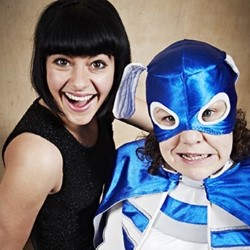 Jess has Tourettes Syndrome with swearing tics, so this performance may include involuntary use of offensive words. There will be BSL interpreted shows on the 7th and 14th August.

Jess Thom has Tourettes, a condition that makes her say 'biscuit' 16,000 times a day. Her unusual neurology gives her a unique perspective on life; one she's about to unleash on the world. This two-woman solo show weaves comedy, puppetry, singing, and incredible tics to explore spontaneity, creativity, disability, and things you never knew would make you laugh. Geranium bashing and penguin gangbangs may or may not feature - no two shows can ever be the same. Jess is neurologically incapable of staying on script, and that's when the fun begins. 'Delightful' (Stephen Fry).