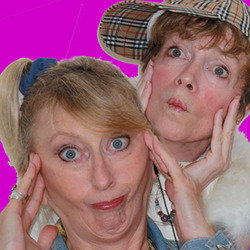 Middle Aged Women: an endangered species. See them in their unnatural habitats and marvel at their ingenious use of camouflage. Are we too old for careers, sex, a social life? Who says? Through sketches, song and dance, Flip (Cabin Pressure) and Maggie (Topping & Butch) share what it means to be thirty plus ... well all right, 30XL in the 21st Century. 'A comic triumph' (Scotsman). Sell-outs at Theatrefest and Ignite 2012. 'Dynamic, entertaining and borderline inappropriate' (FringeSecrets.com). 'Superb script and acting' (phonic.fm).

Girls just want to have fun - even when they're over fifty! Judging by the comedy available on TV and elsewhere, one would think that having a laugh, let alone creating one, was the preserve of the young. Writer/performers Flip Webster and Maggie Bourgein, both Fringe veterans - Flip 'Flipside' ('tragi-comic triumph' Scotsman) and Maggie with Topping and Butch, prove that comedy, and in particular the sketch show, isn't just a young man's sport - and their humour appeals to all. 'Appreciated by all audiences, including us males!'

Middle-aged women: an Endangered Species. See them in their unnatural habitats and marvel at their ingenious use of camouflage. Through sketches, song and dance, Flip and Maggie share coffee ice cream, hip hop moves and what it means to be thirty plus ... well all right, 30XL in 2013.

Flip, a veteran improviser, has worked on TV and radio with comedy's John Finnemore, Marcus Brigstocke, Punt & Dennis, Paul Merton and with Graeme Garden. Films include Harry Potter and the Goblet of Fire and TV dramas Wallander, Silk and New Tricks. She has just returned from filming The Three Musketeers in Prague. Maggie Bourgein started her career in the D'Oyly Carte Opera Company and has since been in numerous theatre comedies and musicals. She runs her own voice-over company.

Possibly the oldest (and funniest) female double-act at the Fringe.