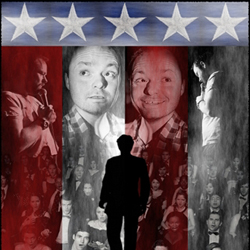 Stand-up show starring Will Mars performed on the following days in August 2013...

A show about how America changed the world. Well, how America changed the world for one man. Not that having your world changed is a good thing. Sometimes it is but sometimes it's not. Let's just say it's a show that reveals a man who grew up with a mother and Americana. Will Mars is 'fearless' (List), 'engaging' (Chortle.co.uk) and writes jokes that 'take us out of our mundane reality' (Guardian). Shortlisted for Dave's Funniest Joke of the Fringe 2012.