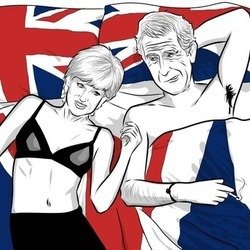 Satire performed on the following days in August 2013...

A stylish and highly acclaimed reimagining of the split of Charles and Diana, the fall of the Conservatives amidst allegations of sleaze and the rise of New Labour performed as a Shakespearean history full of 90s Brit Pop nostalgia. Created for the RSC Open Stages project in 2012, War of the Waleses comes to Edinburgh following two sell-out runs culminating in a performance at the RSC Dell Stage last summer. 'A spark and wit that is completely its own' (BroadwayBaby.com). 'A superb Blair'... 'impressively refined and interesting theatre' (EverythingTheatre.com).