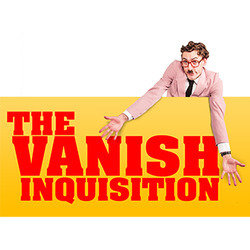 What happens to his characters when an actor mysteriously disappears? Do they simply vanish into thin air or stand up and fight? The Vanish Inquisition is a hilarious new play about exactly that. Join Uncle Ted, Kenny Ricketts Jnr, Katia Kadrula and Rudy Babylon, four comedy misfits in search of their maker as they embark on a surreal and riotous journey of self- discovery, self-obsession and self-destruction! This new play by award-winning playwright Philip Stokes (Razing Eddie, Heroin(e) for Breakfast) and rare flower collector Richard Turner (Lotus Berthelotii, Cypripedium Calceolus) is not to be missed!