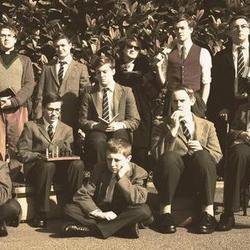 David Hare's play is based on his own experience of being a scholarship boy at Lancing College in the 1960s. Blakemore simply does not get the rules by which life at Lancing is conducted. He is earnest, lonely and regarded with suspicion by the other boys. 'I used to be like you,' says the prefect, 'but then I learnt the rules.' The play examines the balance between individuality and conformity, and captures the rituals and routine cruelties of boarding school life, as well as the humour so essential to its workings.