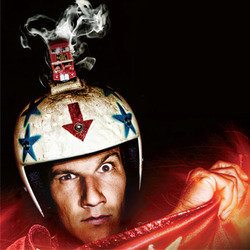 Variety. Once considered the zenith of great, family entertainment which packed out theatres across the world. But now, in this modern era of instant, flat screen, comfy sofa viewing, 'variety' only appears to exist on ITV1 (c) Simon Cowell. Elsewhere - it's become something of a dirty word in the industry. Is 'variety' doomed to the scrap heap? Lost forever?

But wait... what's that?
Something on the horizon is looming into view.
Something completely extraordinary.
Something bursting with talent.
Something... slightly fat.

That's right! Slightly Fat Features will be crash landing into the Pleasance for the Edinburgh Festival Fringe 2013 (running every day at 5.50pm from 31 July - 26 August) single handedly rescuing the genre of 'variety', giving it a seriously refreshing and funny make over and drop kicking it into the 21st century. BANG!

WHAT? Slightly Fat Features is a riotous comedy cabaret troupe that have been described as Monty Python meets Cirque du Soleil. A new dawn for variety.

WHO? Seven ridiculously talented, supremely humorous and slightly porky gentlemen who have all honed their craft through years of performance. Together they create a force of entertainment stronger than the sun. FACT.