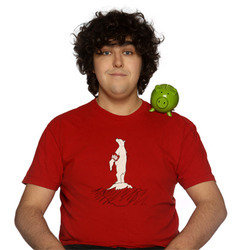 Don't miss this hotly anticipated UK debut from the multi award-winning Kiwi stand-up Rhys Mathewson with a show that's jam-packed with laughs and guarantees you value for money. Dave's Leicester Comedy Festival Best New Show Nominee 2013. 'Ferociously talented' (TVNZ.co.nz). 'If you see his name on a poster and you don't go, you're a moron... Incredible talent' (TheatreReview.org.nz).

Equipped with nothing but a microphone, an easel and a bathmat, Rhys Mathewson promises to earn every pound of the ticket price paid for the show - 10 jokes worth at least £1 each, and 10 laughs (plus extras for free), with the audience deciding the sterling worth of every jest.

Fresh from sell-out shows in his native New Zealand, multi-award winning Rhys Mathewson makes his UK debut with an award-winning show that guarantees you value for money.

Now based in the UK, at 22 Rhys is one of New Zealand's youngest professional comedians. In 2009 his first solo show "The Best $18 You'll Ever Spend" won him the Festival's "Best Newcomer" Award and the a whole heap of critical acclaim.

At the 2010 New Zealand International Comedy Festival, Rhys was written into NZ comedy history when he was awarded the coveted Billy T Award with his show Rhyspect, making him the youngest ever recipient at only 19 years old (previously awarded to The Boy With Tape on His Face).

Rhys's energy and youthful take on complex issues, combined with his charm, self-deprecating humour, and wonderful story telling talents, perfectly delivered one-liners and physical presence have now established him as a sought after comedian and writer in the NZ entertainment industry.