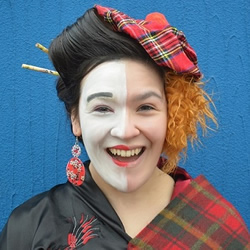 Edinburgh-based writer and comedian Natasha Yapp presents to you, you, you and him Offal Comedienne, a surprisingly pleasant assault on the comedy senses detailing the ups, downs and anomalies that have pervaded her existence thus far.

Join 23-year-old Natasha on her cathartic and inane journey as she relates the complexities of identity politics, family, graduate life, and a plethora of other topics she deems necessary, in an honest and revealing fashion (warning: may contain cynicism).

As well as writing and performing solo stand up comedy, Natasha has written articles published on the Funny Women website, and writes comedy blogs and really very earnest poetry. Her solo comedy has been described by established comic Tom Allen as, "SO brilliant - really inspiring stuff" and who is she to argue with the experts?