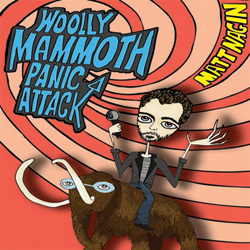 A bizarre, perturbing odyssey into the mind of a deeply troubled soul. In this debut stand-up show, Matt proves he's darker than the average Jew.

The Edinburgh Fringe Festival in association with Laughing Horse is proud to present the comedy stylings of Matt Nagin. This energetic, irreverent stand-up hour, Woolly Mammoth Panic Attack, will be held in The Aerie Room, after a preview performance at the People's Improv Theater, and sold out shows at East to Edinburgh at 59E59 Theaters in New York City.

NYC comedian Matt Nagin is a highly innovative performer and a favourite in clubs and colleges across the United States. Join him as he discusses everything from the virtues of being single to the failure of the war on drugs. With his energetic delivery and conversational tone, Matt takes his audience on a remarkable journey through his hilariously neurotic psyche, featuring dynamic impressions, wacky tales, and an incisive satire of popular culture.

Matt has opened for Robert Klein and shared the stage with innumerable noteworthy acts including Todd Barry, Dan Naturman and Jim Gaffigan. He performs regularly at the major NYC venues, producing his monthly comedy showcase Matt Nagin Presents at Broadway Comedy Club, Greenwich Comedy Club and Eastville Comedy Club. His stand-up routines have been seen on SITV and heard on Big810AM. As an actor, Matt was featured in The Williamsburg Film Festival.

Matt is also a writer, currently for The Humor Times and Policy Mic. His work has appeared in Grain Magazine, The Antigonish Review, Spillway, and The New York Post.