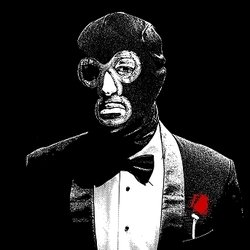 You could argue by now it's demeaning for five men approaching their thirties to be donning gimp masks, prancing round in thongs and making knob gags. You'd be right. Despite that they're back and this year they mean business. A blistering hour of fast-paced sketches, 'big laughs' (Fest) and 'gloriously bad taste' (Guardian) that confirms they're a 'redoubtable force in sketch comedy' (Scotsman). Edinburgh Comedy Awards Nominees. Chortle Award Winners. Constant disappointment to their parents. 'Sketch comedy doesn't get much better than this' (Scotsman). 'Quite Brilliant' (Times). 'All hail Late Night Gimp Fight' (Independent).

Late Night Gimp Fight are back at the Fringe, back to a five-strong group, and back to their very best. The unashamedly ambitious and downright dirty sketch group make a spectacular return to this year's Edinburgh Fringe with their trademark blend of fast paced, tightly-choreographed and relentlessly inventive sketches.

Combining song, dance, sketch and... erm... gimps this is set to be the biggest, most blistering hour of comedy the Fringe has ever seen. Just don't come if Spiderman was your childhood hero, ok?

Nominated for the Foster's Edinburgh Comedy Best Newcomer Award in 2010 and winners of Best Character/Sketch Act at the Chortle Awards in 2011, the Gimps formed in 2008 and are made up of Paul Biggin, Richard Campbell, Lee Griffiths, David Moon and Matt Ralph. Lee, Matt and Paul trained at East 15 Acting School and David trained at Drama Studio London. Richard spent the last year becoming a fully qualified Lawyer. So you can imagine how pleased his Parents are.

They are directed by Steve Marmion, Soho Theatre's Artistic Director and are an Associate company of Soho Theatre. This year's Edinburgh Fringe will be Late Night Gimp Fight's fifth run at the festival. You say veterans, they say stubborn.