The Edinburgh Fringe is a brilliant way to spend the month of August... but it can also drive you stark raving mad. Sketch group Late Night Gimp Fight share five tips for how they try and keep sane over the festival... 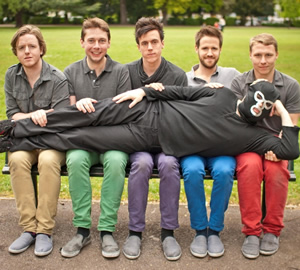 1. Try to get into a routine. Set your alarm for ten, regardless of when you got in the night before and really try and get up and do something with your morning. This becomes harder as the month goes on and your body slips into Fringe time zone where getting up at eleven constitutes "an early start". However, try and keep your body clock as normalised as you possibly can.

2. Find something non-Fringe related to do. Some comedians play football, some go swimming or to the gym. Whatever it is, it's important for ones sanity to escape the Fringe bubble at least once a week and do something that doesn't involve your show. If you have a day off during the run then actually getting out of Edinburgh and into the countryside or to a beach and seeing something that doesn't have stars slapped all over it will do you the world of good.

3. Don't read the reviews. Perhaps a cliché this, and easier said than done. But we cannot recommend enough the benefits of not letting the opinions of a few reviewers alter your opinion of the show you've created. As long as you have worked as hard as you can on it, you are proud of it, and you can sell it, that's all that matters. By all means read them after the month ends, on the train back perhaps so you can arrive in King's Cross either a sobbing wreck or a smug git. Just don't read them while you're up here. 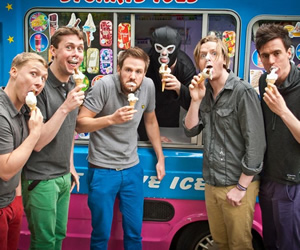 4. Eat something that isn't battered. Between the chips, burgers and battered Mars bars it will do you the world of good to force down a few bits of fruit and veg. Believe us, we love chips as much as the next person, but it's very easy to succumb to fast food every day which has repercussions. Getting ill half way through the Fringe is not fun at all, so give your body a fighting chance with at least some nutritional food that isn't deep fried.

5. See shows of other genres. If you're up here doing comedy, go and see a physical theatre show one day... or some experimental dance. It may be shit, in fact it probably will be, but a) it's something to talk about and b) you need to get your mind out of the comedy world for a few hours, so you enjoy it all the more when you're back in it. You won't be sitting deconstructing the show in your head like you're tempted to do when watching comedy, or seething with envy at the talents on show, you'll just be able to enjoy it as something completely different.

Late Night Gimp Fight are trying not to lose their minds until the 25th August at the Pleasance Dome at 10pm. Listing

To find out more about the Gimps visit www.latenightgimpfight.com