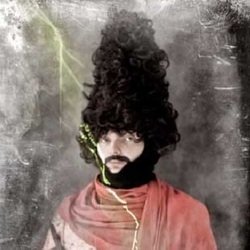 This definitely should be the first character-based show to be filmed by drone. Matthew Kelly, star of the Shenzhen Festival, Pastor Kofi, of Mecca Bingo 3:16 and Matty Kelly, bored pub landlord, have come together to stage the Titanic of all weddings. Think Nelson Mandela personally tearing down the Berlin Wall. 'I predict big things' (Harry Hill's One to Watch 2013). 'A man with the sort of X factor that suggests he could become something a bit special' (LondonIsFunny.com). 'Gloriously odd' (Chortle.co.uk). 'Gloriously silly' (Time Out). www.pay-what-you-want.info

Start the Karl is a new show written and performed by hotly tipped, up-and-coming Fringe sensation Karl Schultz and directed by Luke Chaproniere.

Karl Schultz: Start the Karl is an expressionist and thunderingly silly metaphor for Karl's own very unique upbringing, where by the age of 11 he had already followed his Salvation Army minister parents to Northern Ireland, Ghana and Bangladesh. Inspired by the nomadicity of his formative years, Start the Karl is a 50-minute comedy spectacle driven by surreal vignettes of three central characters:

Meet Matty Kelly, a 50 something Irish publican from a familiar and ridiculous world once-removed, akin to viewing one's home from the outside.

Pastor Kofi, a young multi-faith bingo caller trying to adapt to life in the UK, part of Karl's fictional biography, playing out a not entirely impossible if highly warped alternate path.

Matthew Kelly, a fully-formed curio émigré who appears both timeless and dislocated - a strikingly colourful analogy for life as a "3rd culture kid". Think a Muppets recreation of Nelson Mandela personally tearing down the Berlin Wall.

Since performing at the Edinburgh Festival Fringe in 2012, Karl went on to perform as Matthew Kelly at the Shenzhen International Fringe Festival in China, before assuming the lead role in The Weirdos Christmas Pantomime version of Hook, later nominated for a Chortle Award.

He has also since become a regular The Alternative Comedy Memorial Society at the Soho Theatre, Knock2Bag, The Invisible Dot Presents The New Wave, featured in TimeOut Presents at the Udderbelly and continued to be an integral part of the innovative Weirdos night. Karl has also begun The WhatNot Podcast with fellow comics Joz Norris, John Kearns and Matthew Highton.