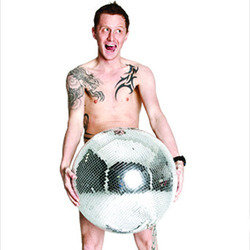 Ashington's very own cheeky-boy is back - Kai Humphries returns to the Edinburgh Fringe 2013 with a brand new show - Shameless. Shameless is a show about still being the same shameless Geordie boy who grew up on a council estate. It's a show about leaving in the North East of England for the first time aged 26 and travelling to India, New York, Bahrain and Australia: Whereas Kai used to only annoy his neighbours, now he causes mischief on a global scale. You really can't take him anywhere.

Welcome to the unique and vivid imagination of Foster's So You Think You're Funny? 2009 finalist, Kai Humphries - a comic with endless boyish charm and brains to match. This star of the Comedy Channel's The Comedy Store has made a name for himself as the new comedian on the block to watch while keeping in touch with his Geordie working class roots.

Having supported Rhod Gilbert and Daniel Sloss on tour as well as performing alongside other leading artists including Rich Hall and Kevin Bridges, Kai's star is rising. He has made quite a splash with his 2013 debuts at both The Melbourne International Comedy Festival and The Sydney International Comedy Festival. He is in demand for the biggest UK comedy clubs and will be on tour again in the Autumn.

Kai's enchantingly vivid, delightfully optimistic and high-octane delivery has put this bright and highly original new rising-star of comedy firmly on the road to success.