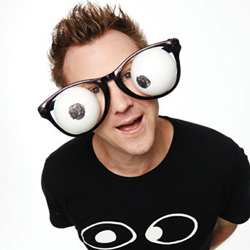 Jason Byrne is back with a brand new show for the Festival 2013. 'You are just blown away by the sheer force of his talent and charisma' (Independent) 'Awesome, amazing, brilliant, hilarious and the outright king of live comedy' (Times) ***** (Metro) *****(Mirror)

Jason's legions of fans will already be familiar with his 'special eye', which revealed itself in his formative years and that went on to shape much of his childhood growing up in Ireland during the 70's and 80's.

Recounting a plethora of life experiences and hilarious anecdotes said eye enabled, the tempo is raucously upbeat, the attitude anarchic and the delivery spontaneous.

There is also his trademark helping of inimitable audience interaction. Byrne effortlessly roots out and renders even seemingly innocuous audience members silly and funny with a comic finesse like no other.

People from all walks of 'Special Eye' welcome for a hyperactively engaging, and infectiously funny night. A talent not to be missed.