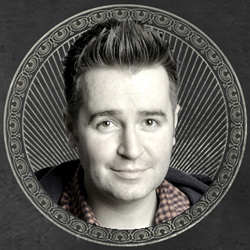 No latecomers. Under 14's should be accompanied by an over 14yr old.

An hour seen though the comedic eyes of Jarlath Regan is unlike any other experience at the Fringe. By fusing eye-popping visuals, on-the-money observational stand-up and high grade audience messing, Jarlath presents what is '...always one of the fastest and funniest shows of the festival' (Jason Byrne). If you're looking for straight-shooting, no fooling, original stand-up comedy you won't be disappointed. ***** 'Hilarious' (Independent). **** 'Side-splitting stuff' (Metro). Seen on Russell Howard's Good News.