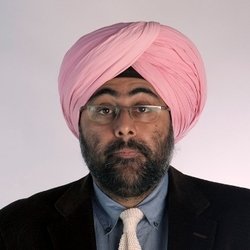 So Television are proud to announce the highly anticipated return of Hardeep Singh Kohli to The Edinburgh Festival Fringe this year with a brand new stand up show.

Hardeep's new show examines the pitfalls and triumphs of a pure soul searching for love...

Unfortunately that soul is trapped in the body of a 43-year-old, hairy, fat, brown man from Glasgow.

Hardeep is a regular host on Channel 5's hugely popular current affairs show, The Wright Stuff and has been a regular reporter on BBC One's The One Show and a guest on BBC One's Question Time, and This Week with Andrew Neil. For Channel 4 he has written and presented the BAFTA Award winning In Search of the Tartan Turban, the critically acclaimed and award winning Hardeep Does... and the seminal gambling series 50 Says You'll Watch This.

As a journalist, his column in Scotland on Sunday called "Hardeep is your love" saw him twice nominated in 2007 and 2008 for Scottish Columnist of the Year at the Scottish Press Awards. He is also Contributing Editor on the Spectator Magazine, has written for the Independent on Sunday, The Times, Observer Woman, Conde Nast Traveller to name but a few.

Having started his broadcasting career in radio he still holds the wireless very dear, presenting extensively across Radio 4 and Radio 5 Live and has made a plethora of documentaries for Radio 2, Radio 3 and Radio 4.