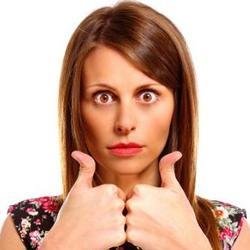 The girl with big teeth you may have seen on Snog Marry Avoid? (BBC3) and Fake Reaction (ITV2) will be doing totes hilarious talkies for 30 minutes. It may involve a flip chart. It will definitely involve irony-free usage of the word amazeballs. 'Charismatic, personable and bright' (Chortle.co.uk). 'Sparkling and energetic company' (ThreeWeeks).