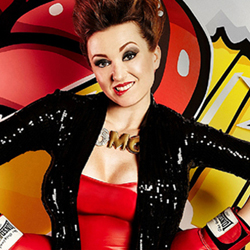 Comedy Rumble: where the audience and comedy contenders unite either in the red or the blue corner and, round by round, battle it out for points. There are two teams, red and blue, comprising of audience and comic acts on each team. Each round, both teams will be called into the ring - our comedians going head-to-head, fighting for laughs like true comedy contenders, and the audience fighting for points via unruly and outrageous revelations. The fight is brutal and raucous, however, only one team can come out on top and be crowned the Rumble Champion.