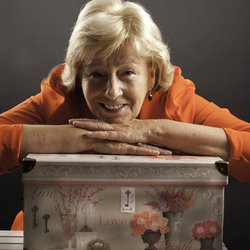 Winnie McGoogan from the award-winning Mrs Brown's Boys. This one woman show written and performed by Eilish O'Carroll charts her own life in a revealing, emotional and comic journey, growing up in the 1950s in Dublin, moving through two failed marriages, coming out, and embracing getting old. This play will draw laughter and tears, and Eilish's mantra of Live Love Laugh not only highlights her attitude to life but describes the spirit of the show itself. 'Heart-warming, funny and thought-provoking. Eilish O'Carroll is a tour de force' (Cork Echo).

"I was a fifties baby. The second youngest in a family of ten! So you can imagine the celebrations when I arrived. The bells and whistles and the partying went on for a week... not!"

So begins the world premiere of Eilish O'Carroll's (Mrs. Brown's Boys) beautifully touching one woman show charting her journey from chaotic childhood to contented adulthood via a chest of drawers, the confessional, two marriages and a revelatory bus journey.

She was born in Dublin in the early fifties. Her Father was a Cabinet Marker, her Mother a Labour TD (MP). She developed a passion for performing at a very early age in order to get noticed by her parents and siblings. Nine times out of ten this got her a clip around the ear rather than applause. Despite hardships endured by many a large family at that time, love and laughter were a huge part of her life. Having a younger brother like Brendan (writer and creator of Mrs. Brown's Boys) and a mother, who against all odds influenced change particularly for women, inspired her to follow her dreams.

This humorous heartwarming tale of life, love and reinvention will be an inspiration for anyone who ever longed for more from life.