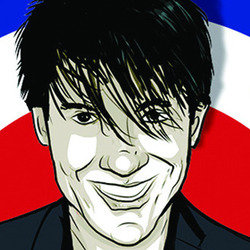 Doug Segal is an exciting new kind of entertainer combining comedy with seeming feats of mind reading and mind control.

In his brand new show, Doug Segal will be pushing the boundaries of the very concept of comedy mind reading; picking an audience member and turning them into a mind reading mentalist (via the Brainmatiser 3000™) - after which they perform all the mind reading stunts in the show with Doug simply acting as guide.

This has never been done before.

Part two-handed sketch comedy show (in which one of the players has never seen the show or the script before, and indeed didn't even know they were taking part in before they arrived), part mind-blowing feats of mind reading and mind control. And once again everyone in the audience goes home with a trick they can do with their friends.

Interwoven into the narrative thread of the show are comedy sketches (both live and live interaction with pre-recorded video) co-written by Guy Kelly from the Beta Males and James Hamilton of Casual Violence and starring the two people on stage - Doug and that night's audience member. There's also psychical and prop based comedy, animation, live music, Victorian detectives, a Buddhist monk and a goat.