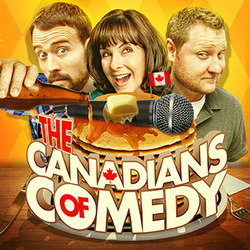 Three headlining, multi award-winning Canadians on one bill! Tim Rabnett, Allyson Smith and Paul Myrehaug are all Montreal Just For Laughs Comedy Festival veterans and boast a combined 40 years of stand-up experience. The Canadians of comedy are an internationally toured trio and will not disappoint! 'Paul carries comedy off with a natural flair in a manner so effortless one might say it's engrained in his DNA' (Hindu, India). 'Tim is a Fantastic ... seasoned stand-up' (Montreal Mirror). 'Allyson is yet another hilarious Canadian with great hair' (Stewart Francis).

Every year some of Canada's top comedians make their Edinburgh debut and audiences fall in love. This year is no different, and this is the show that gives you three chances to fall in love... or at the very least guarantees you one night of discreet unbridled laughter. The Canadians Of Comedy showcases three multi-award winning, headlining stand-ups on one bill! Tim Rabnett, Allyson Smith and Paul Myrehaug boast a combined forty years of stand-up experience, have multiple Canadian television appearances, and are all veterans of Montreal's Just For Laughs Comedy Festival. With Paul's laid back charisma, Tim's enthusiastic optimism, and Allyson's intoxicating charm, this is a show that will be attractive to everyone. Join us this August, nightly at 11:15 at The Gilded Balloon, and see three Canadian comedians who are completely unapologetic, but only about their comedy. Sorry if that came out wrong.