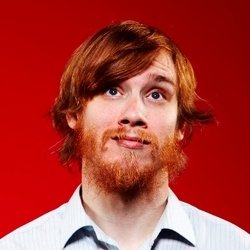 After supporting Doug Stanhope, appearing on 8 Out of 10 Cats (Channel 4) and Russell Howard's Good News (BBC3), award-winning comic man-child Bobby Mair unleashes his first hour on the Edinburgh Fringe. Prepare to enter the mind of a disturbed genius. 'Mair exudes a kind of effortless awkwardness that has served some of stand-up's greats so well down the years, and yet brings to it something fresh and downright disturbing. A bright, dark future surely awaits' (Stage). '...left the audience wiping away tears of laughter' (BroadwayBaby.com). 'The kind of man you'd yank your children away from' (Scotsman).

In Bobby Mair - Obviously Adopted he talks about the bad luck of being adopted into a dysfunctional family, having to create a profile on a gay dating website to search for his father and his sadness around being Justin Bieber's cousin. He also delivers his world manifesto about how everyone who lives in the Middle East should get to vote in the U.S. elections and how ridiculous it is that we won't even go to the trouble to count how many civilians died in the Iraq War. Venturing deeper into Bobby's mind we enter a dark, dark place where he talks about his deranged suicidal fantasies of revenge, his plans for if he ever goes to prison and finally, what his elaborate ideas are for his last days with us.

Driven by a natural flare for comedy, Bobby enrolled at Toronto's Humber College on their Comedy Writing and Performance Program; it was 2005 and a star was born! He dropped out before the year-end. Feeling like the course was "too slow" to understand his passion for the darker side of humour, he confidently took himself straight out to the live circuit and didn't look back.

Mair's daring material quickly made him a strong name in the stand up community. In 2008 he was awarded the 'People's Choice Winner' in the prestigious Canadian comedy competition, Stand Up and Bite Me. 2009 saw him secure 'Best Newcomer' at the 'Canadian Comedy Awards'. Two years on, Bobby won the entire 2011 [/i]Stand Up and Bite Me[/i] contest walking away with $10,000. A 30-minute nationally televised comedy special followed, entitled Comedy Now. At the time Bobby was making money by participating in medical studies. Upon winning the contest he was heard to say, "The most exciting thing about this is that my veins get time to heal."

Bobby gained UK notoriety by securing an opening slot for his favourite comedian Doug Stanhope, "He let me go on stage because I hung around for 2 days staring at him". Stanhope liked Bobby and booked him to open again in Toronto at the Annex Wreck Room and a further 3 nights at Leicester Square Theatre. Bobby Mair is one to watch. Carefully.