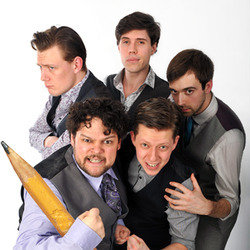 Sketch show / storytelling performed on the following days in August 2013...

Returning after three sell-out, five-star Fringes, the Chortle Award nominated sketch-storytellers present an epic set in a city full of superheroes. Enter a world of capes, crime and chaos as the Betas swoop into a mystery that beats you into a bloody pulp-fiction. Sketch comedy that asks: Is there a hero inside you? Definitely not, but come anyway. Stars of Radio 4's Sketchorama. ***** (ThreeWeeks, Spoonfed.co.uk, BroadwayBaby.com). **** (Time Out, Chortle.co.uk, Metro, Festmag.co.uk, List). 'Genius' (Sunday Times). 'One of the most exciting, gloriously funny acts out there' (Time Out).