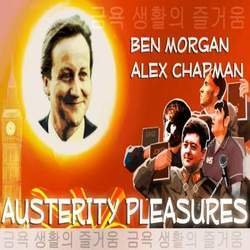 As the UK tightens its belt, Alex Chapman and Ben Morgan return to the Fringe with their show Austerity Pleasures. This free stand-up show focuses on politics, social satire and leader lampooning. From 1-24th Aug (except Sundays). Join us, and a special guest, at Venue 101 - Finnegan's Wake, for an hour of free political comedy.